Professor Tweed
The Fender Princeton adapted for use as a distortion stompbox
by runoffgroove.com

One of the often overlooked Fender amps is the tweed-era Princeton. They are excellent guitar amps, especially for blues playing. The major drawback was the 4.5 watt output wasn't enough to keep up with a band. Again, using the technique pioneered by Doug Hammond, we decided to try to capture some of the sound of this little amp in pedal form so it can be used with a band.

We took the 5F2-A schematic and copied it part for part using MPF102 JFETs in place of each tube stage. Each tube Grid was replaced by a JFETs Gate. The tube Plates were analogous to a JFET Drain. Finally, a tube Cathode was replaced with a JFETs Source. We used a 100k trimmer for the plate resistors on the schematic due the fickle nature of JFETs and the much lower power supply involved.

Our "artistic license" is in the choice of the last JFETs output cap and the setting of the dual Low Pass Filters. Our goal was to produce the sound of a Jensen speaker. These are typically a little broader in frequency response than something like a Celestion.

Using all MPF102 JFETs, there is a great range of sounds available. No, you won't be playing "South of Heaven" with this pedal, but some classic blues, country, surf and rock sounds live here. The cleaner sounds are compressed and have an edge to them. As you wind up the Volume knob, you'll hear the dirt level increase. At full Volume, there is plenty of nice overdrive that never loses its dynamic feel. Even at full tilt, the circuit can clean up very well.

Try using a J201 in the first stage. You'll notice the overall available gain increase and the sound will darken a bit. We preferred the sparkle of all MPF102s, but if you use sockets (as is always suggested) for the transistors, you can experiment until you find the combination you like best.

Socket the cap in the feedback loop. It is the 1uF cap connected to the output cap on one end and the 22k feedback resistor on the other. In this socket, try any value from 2n2 to 1uF. The sound will "open up" most around 10n and will "close up" as you get closer to 1uF. Try different values here to find the sound you like most. 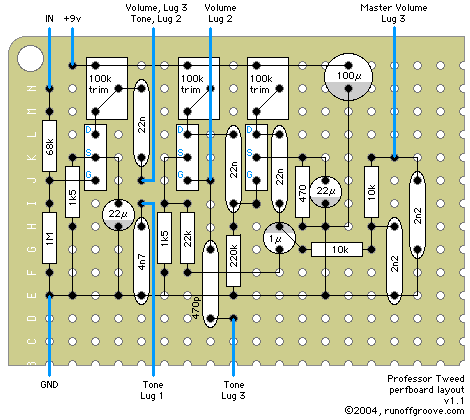 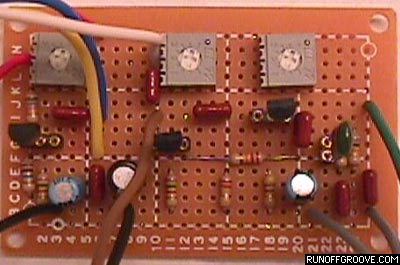 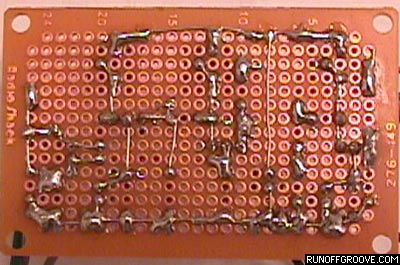 Professor Tweed by runoffgroove.com is licensed under a Creative Commons Attribution-NonCommercial-ShareAlike 3.0 Unported License.
Permissions beyond the scope of this license may be requested.