Supreaux Deux
The Supro 16T adapted for use as a distortion stompbox
by runoffgroove.com

Supro was a budget brand name for amplifiers produced by Valco in Chicago, IL during the golden age of tubes. The same model of amplifier could be sold as a Gretsch, National, or Airline brand (through the Montgomery-Ward catalog). Valco manufactured amps are now highly sought after and have increased in price accordingly. Jimmy Page reportedly used a Supro amp while recording Led Zeppelin's debut album and other guitarists have also employed the small combos in the studio for searing electric blues. In April of 2002, these amps were featured in the ToneQuest Report.

The original Supro 16T circuit design is similar to other single-ended Class A amplifiers from the period, but subtle differences are present. The filter network following the first stage rolls off bass and treble content where the tonestack of a Fender Champ or Princeton normally resides. The Supro's single Tone control is placed after the second pre-amp stage. Thus, more high-end signal is present to drive the second stage. Also, there is no use of negative feedback to reduce distortion. This circuit produces a wide range of sounds that do not sound much like the Fenders, Voxes, and other famous names; it has it's own character and identity.

Since its release, the original Supreaux project became quite popular as a low to medium gain overdrive, so we decided to work on a refined update while retaining its characteristic tone and honoring its origins. We are very proud and satisfied with the sonic improvement of this second version, which we obviously named Supreaux Deux.

The following upgrades to the original circuit were implemented in this revision:

As an option for the builder, an extra capacitor may be added with a switch in order to fatten up the sound, which is especially nice when using the pedal as a full frequency boost.

The Supreaux Deux differs from other FET-based designs based on tube amps, since we had the benefit of owning the actual amp to compare with the stompbox version. The revisited circuit captures much of the amp's tone. The brilliant treble response is replicated, along with the Tone control range. A sweet overdrive even kicks in at nearly the same point in the Volume pot's rotation! If you are looking for an articulate blues or classic rock sound, this is a good place to start. Many sounds, from Albert King-type tones to a Led Zeppelin sonic blitzkrieg to sparkling clean can be produced with the Supreaux Deux. Be sure to work your guitar's volume knob and your pick attack when playing with this circuit, as it is very sensitive and dynamic.

Regarding the supply voltage, voltages lower than 18V will reduce drastically the overall gain and sacrifice the tone of the circuit, so 9V won't work properly, and 15V would be the minimum recommended voltage, accepting that you'll be sacrificing around 6 dB of gain. Perhaps the simplest supply alternative consists in a pair of 9V batteries connected in series. A voltage doubler built around a MAX1044 or equivalent will also work fine, provided the clock frequency is above the audio range. 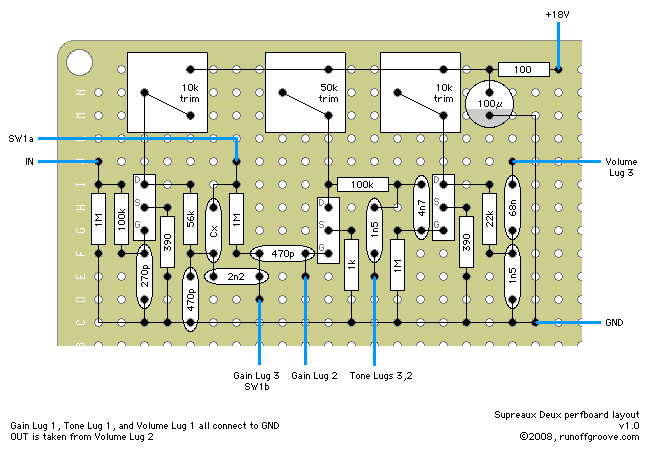 Supreaux Deux by runoffgroove.com is licensed under a Creative Commons Attribution-NonCommercial-ShareAlike 3.0 Unported License.
Permissions beyond the scope of this license may be requested.