One of the factors that influences the sound of the TS is the opamp in use with its particular characteristics and limitations. Opamps are known to clip in a rather hard and unmusical way, and also have very high open loop gain which sometimes generates unwanted ringing and artifacts that arise when nonlinear components are present, like the diodes in the feedback loop of an OD.

In the context of the FX-X contest of August 2006, we decided to implement the venerable TS based around the CD4049UBE logic IC since its amp stages, when used in audio applications, are known to clip softly and have moderate gain, typically in the order of 30 to 100 times, as opposed to the usual 100000+ of an opamp. For the sake of clarity, the CD4069UBE IC can be used as well with equally pleasing results.

The result was an overdrive pedal that has some air of the original TS, but with more attitude and character. The gain control is very wide, ranging from almost clean, to light OD, to moderate OD to a nice and full distortion. At minimum gain, there isn't as much bass loss as in a real TS, which is a good thing if adding a little dirt or pushing a tube amp is desired. The tone control provides great control over the sound, and at maximum it allows the signal to pass nearly unfiltered, contributing to the transparence of the pedal at low gains.

Apart from the universe of clipping diode changes and the high-pass filtering R-C components on the distortion path, Rx could be replaced with a trimmer or pot.

Also, the Vdd resistor may be adjusted for subtle and not so subtle changes in the overall sonic quality of the circuit. When using a CD4069UBE without this resistor, the current consumption is as high as 22mA. With 330 ohms, current consumption dropped down to 7-8 mA and voltage on the Vdd pin was reduced to 6.5V. A 1k or 500 ohms pot could be installed to starve the circuit at will - this control can be labeled VARIAC, if so desired.


Listen to the UBE Screamer! 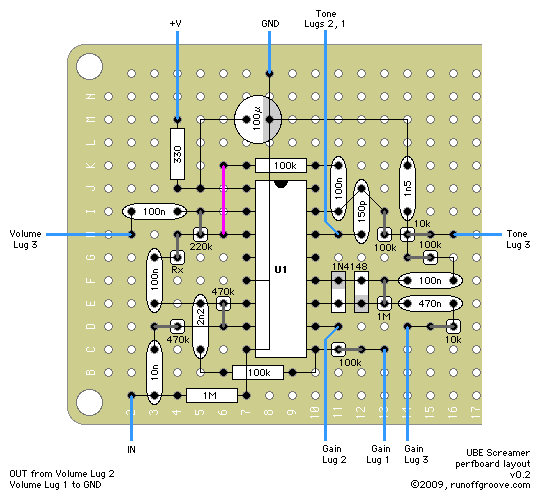 UBE Screamer by runoffgroove.com is licensed under a Creative Commons Attribution-NonCommercial-ShareAlike 3.0 Unported License.
Permissions beyond the scope of this license may be requested.