The English Channel
The Vox AC-30 Top Boost adapted for use as a distortion stompbox
by runoffgroove.com 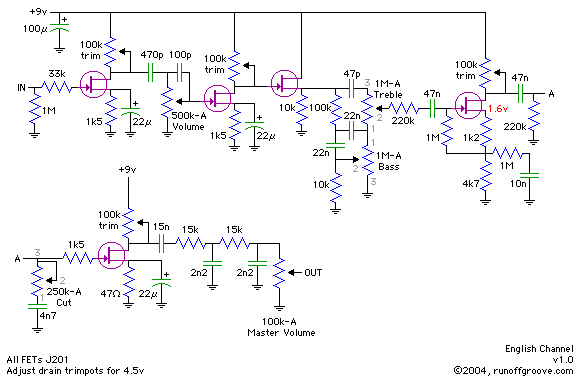 The Vox AC-30 amp is considered by many to be the defining sound of the British Invasion during the 1960s. The Top Boost circuitry provided crisp treble-laden overdrive that perfectly complemented the rich bass content. The English Channel is a JFET-based distortion stompbox that uses the same basic architecture as that classic early '60s amp.

This circuit is based on a 1961 Vox AC-30 with Top Boost, as designed by Tom Jennings and Dick Denney. Artists such as Tom Petty, Brian May, the Rolling Stones, the Beatles and the Shadows have used the AC-30 during their careers. For more information about Vox amps, visit the The Vox Showroom.

The above schematic replicates the Brilliant input, but the Normal input can be simulated by changing the 470pF cap to 47nF.

To obtain 1.6v at the source of Q4, you may need to try different J201 or adjust the 4k7 resistor. During testing and development, values as high as 12k were necessary for some J201. Try to get close to 1.6v, but slightly lower values will have no audible difference.

Note that the Cut control is set up in the traditional manner, reducing treble as turned clockwise.

Philip Miller Tate (a.k.a. Ge_Whiz) found the Cut control to be quite subtle when using the stock values. He reports that substituting a 47nF capacitor and 50k-B pot provided a much more effective control. 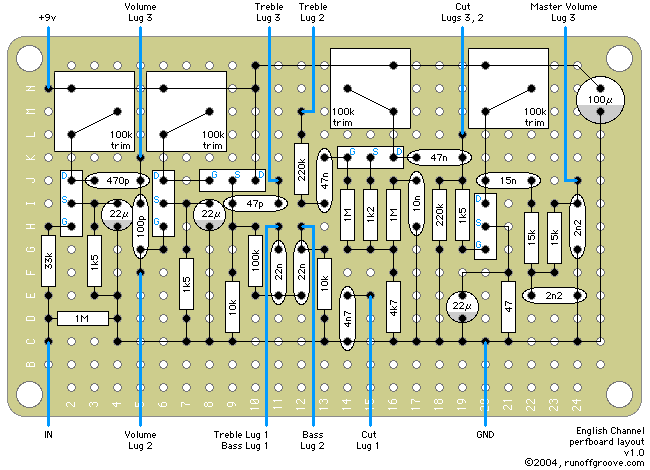 English Channel by runoffgroove.com is licensed under a Creative Commons Attribution-NonCommercial-ShareAlike 3.0 Unported License.
Permissions beyond the scope of this license may be requested.