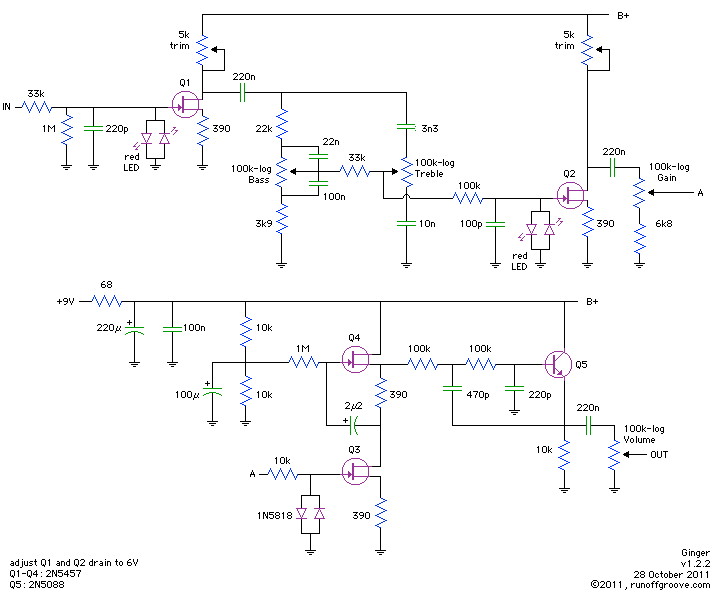 The Flipster, runoffgroove.com's only circuit primarily intended for use with a bass guitar, was released in June 2004. It was another adaptation of a vintage tube amp for use as a distortion pedal, namely the Ampeg SB-12 Portaflex introduced in 1965. Several bass players in the DIY-fx community acted as beta testers during its development, and while the resulting circuit captured a good deal of the target sound, it had higher gain and the overall frequency response was inaccurate due to impedance differences.

In this "next generation" version named Ginger, the tonestack impedance has been scaled down 10x to reduce noise and overall frequency response has been further adjusted to cover a more suitable range with reduced insertion loss, as seen in this graph from Duncan's Tonestack Calculator. 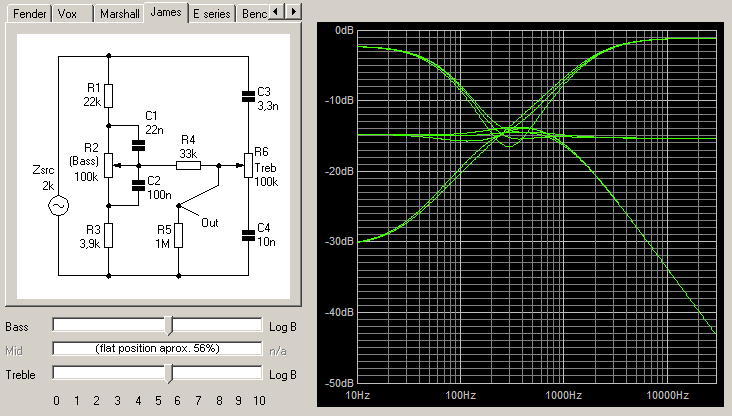 Also, each stage has a pair of clipping diodes at the gate to avoid hard clipping in the JFET stages. Additionally, each stage has been adjusted to provide overall circuit gain more faithful to the Ampeg SB-12 Portaflex. While the circuit does not follow the original amp schematic, it has been tuned to approach the target sound. Finally, the low-pass filter at the output has been upgraded for improved attenuation of frequencies outside the original speaker range.

While the circuit is intended for use with a bass, it also provides excellent overdrive for a guitar and the flexible tone controls allow a great deal of fine-tuning.

The drain voltage of Q1 and Q2 should be adjusted close to 6.0V by tuning the corresponding trimpot. Once the optimum resistor value is determined, each trimpot may be optionally replaced by a fixed resistor for best noise performance.

Ginger by runoffgroove.com is licensed under a Creative Commons Attribution-NonCommercial-ShareAlike 3.0 Unported License.
Permissions beyond the scope of this license may be requested.