Matchbox
The Matchless DC/30 adapted for use as a distortion stompbox
by runoffgroove.com

Back in the mid-90s, the Matchless DC/30 became one of the first boutique amps to hit the market. It excelled at clean tones, as well as thick Vox-like overdriven lead sounds.

There is good reason for the similarity in sound to a Vox amp. The lead channel of the DC/30 appears to be a modified Vox AC30/4. The AC30/4 amp featured the EF86 pentode preamp tube, just as the Matchless design.

runoffgroove.com set out to capture the lead sound of the Matchless DC/30 amp, using the technique developed by Doug Hammond for his excellent Meteor circuit.

We opted for a MOSFET to replace the EF86 tube. The MOSFET has better gain and fidelity attributes than the JFETs we normally use. We used J201 JFETs for the remaining two stages.

We've named this circuit the Matchbox.

An item of interest in this circuit is the odd-looking Tone control. This is in some ways similar to the FAC control on old Orange amplifiers. The sound is "thinnest" on setting A, and gets thicker as you progress through the settings. The Cut control acts as a simple Low Pass Filter. As you turn it counter clockwise, it will roll off some of the treble frequencies. We departed from the schematic a bit here. We used a 10n cap where the amp used only a 2n2. The reason for our deviation is to achieve a more dramatic effect. 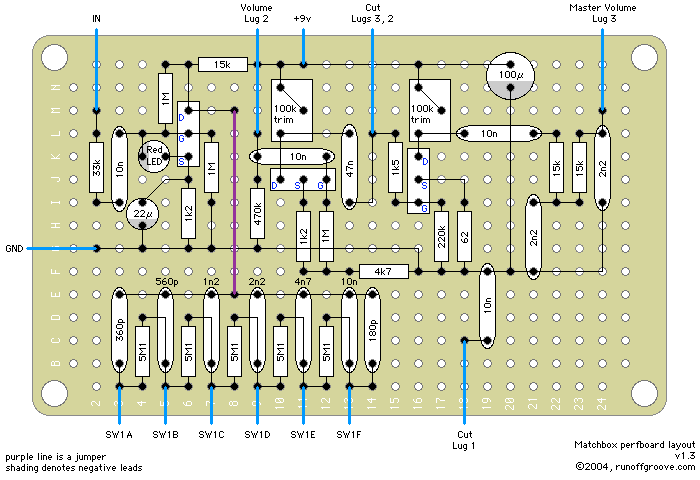 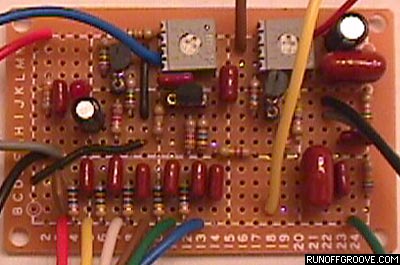 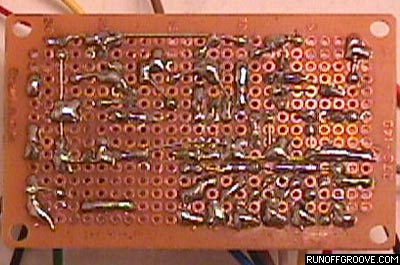 Matchbox by runoffgroove.com is licensed under a Creative Commons Attribution-NonCommercial-ShareAlike 3.0 Unported License.
Permissions beyond the scope of this license may be requested.